The COVID-19 pandemic has upended the lives of everyone in Canada, reaching past the direct health effects to those who contract the virus and their immediate families. The necessary public health measures implemented to reduce the spread of the virus have impacted healthcare, education, the economy, and many other aspects of society including employment and social interactions. This is an unintended consequence that will affect us all during the pandemic and beyond.

Yet the effects of these consequences have not been felt equally. While no one is untouched by the impacts of the COVID-19 pandemic, women have been disproportionately affected.

The BC Women’s Health Foundation (BCWHF) exists to ensure women have access to the highest quality healthcare when, where, and how they need it. That’s why BCWHF engaged Yulu to launch a new report series called Unmasking Gender Inequity to examine the impact of the COVID-19 pandemic on women’s health in BC. The first of the four reports quantified the disproportionate socioeconomic impact of the pandemic on women, along with how this has impacted women’s health in our province.

The first evidence-base report in the Unmasking Gender Inequity series and sponsored by Pacific Blue Cross, revealed that not only have women lost more jobs and taken more time off work to support childcare duties, but the gendered nature of work puts women at higher risk of exposure to, and infection from COVID-19 in BC. This is the result of over half of employed women in BC working in one of four industries with high face-to-face interactions including healthcare, retail, education and accommodation and food services. The report also revealed that If we improve these systemic inequities, we could save over $2 billion each year in lost work hours.

Together, the BC Women’s Health Foundation and Yulu launched a multi-faceted communications campaign to elevate awareness of women’s health issues and call for women and women-specific needs to be considered within the government’s pandemic-recovery efforts and beyond. The campaign included owned, earned, shared and paid opportunities to reach as many British Columbians as possible with its key message.

On launch day, the Unmasking Gender Inequity report was heavily featured in broadcast media, with coverage across all notable national and local stations, such as; Global News, CTV, CBC Radio Canada, CityNews and Vista Radio. There was also widespread coverage across online media with highlights including BC Business, Business in Vancouver, The Province and Castanet. Total launch day coverage spanned across 32 media outlets, reaching approximately 65M people.

Yulu also launched a social media campaign called #WeSeeYou alongside the first report. The social campaign encouraged women, male allies and organizations to take a photo of themselves in a mask, share their experiences of how the COVID-19 pandemic has impacted them and tag women in their lives in recognition of their strength through the pandemic. The #WeSeeYou campaign not only unmasked Gender Inequity through the sharing of personal stories, but also created a moment of solidarity by uplifting the women around us by recognizing the important role each woman is playing during the pandemic. Sixty-eight posts were published across social media in support of the campaign, reaching approximately 190,750 people and engaging 3,610.

“We have worked with many vendors and agencies, and have never been so consistently impressed by every, single, deliverable. We really trusted [Yulu’s] instincts. They weren’t afraid to encourage us to dig deeper on certain decisions. Their ability to marry the technical elements of campaign execution, with the art of crafting messaging that would really resonate & “cut through the clutter” was remarkable.” 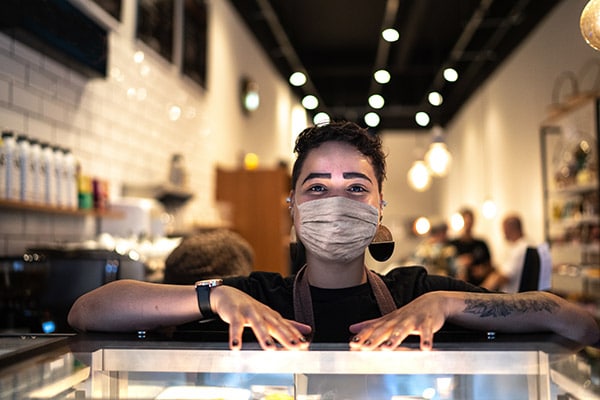 “Dr. Henry and I also wish to acknowledge the 16 days to end gender-based violence. And note a report that includes that subject and many others, called “Unmasking Gender Inequity” that was produced by the BC Women’s Health Foundation and Pacific Blue Cross. I encourage people who are interested — which I think is all of us – to have a look at that report.”

The recurring BC Ministry of Health briefings are broadcast by all major networks in the province, and are well covered by other regional and smaller media outlets. This means that the report and BCWHF were broadcast to a significant audience in BC and beyond.