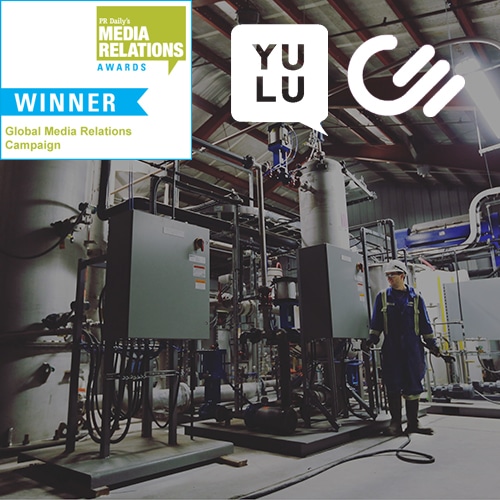 PR Daily?s Media Relations Awards celebrates teams, organizations and consultants who have redefined the field with their groundbreaking work. As a winner in the program through its global media relations campaign, Yulu PR joins an elite group of past winners, including World Wildlife Fund, Whirlpool, IBM, Cigna, American Academy of Pediatrics, Best Friends Animal Society and Oceana.

The Canadian clean energy company Carbon Engineering has advanced its direct air capture (DAC) technology, which absorbs C02 from the atmosphere and delivers it as an end product that can be returned underground or converted into liquid fuel using the company?s AIR TO FUELS? system. Yulu PR was contracted to showcase the company?s ability to deliver a cost-effective, scalable solution to the climate crisis. The resulting campaign has won first place in the ?Global Media Relations Campaign? category of PR Daily?s Media Relations Awards.

It sounds like science fiction?simply gathering C02 from the air to remove it from the atmosphere. Despite this groundbreaking advance, few had heard of Carbon Engineering, an eight-year-old company backed by Bill Gates, among others. That?s where Yulu comes into the picture. The agency conducted extensive research that enabled the team to simplify its messaging to resonate with the broader population. It also helped assess and prioritize story angles.

The team developed a 12-month communication plan that included brand guidelines, a media plan, speaking and award opportunities and more. The campaign launched concurrent with the publication of new research by Carbon Engineering?s founder, showing that C02 can be removed from the atmosphere for less than $100 per ton using the company?s technologies.

Yulu Public Relations is a Vancouver social impact PR agency founded by Melissa Orozco in 2011, with a satellite office for New York public relations. It was the first PR agency nationally to become B Corp, certified ? an agency dedicated to championing social innovation by sharing stories that matter. Yulu has been ranked among the top PR agencies for CSR and is the driving force behind Impact Relations, the discipline of sharing messages and stories that result in businesses having a positive social or environmental impact.

Founded in 2009, CE is a Canadian-based clean energy company leading the commercialization of groundbreaking technology that captures CO? directly from the atmosphere, and a second technology that synthesizes it into clean, affordable transportation fuels. From a pilot plant in Squamish, B.C., CE has been removing CO? from the atmosphere since 2015 and converting it into fuels since 2017. Learn more: www.carbonengineering.com