Yulu is thrilled to announce, our very own Melissa Orozco is featured in this month’s Marketing Magazine for #30under30. She is featured alongside leading industry professionals and recognized for her work in New York, with Yulu and with the Urban Land Institute. This has been an exceptional one-year anniversary month for Yulu and Melissa’s recognition is the cherry on top of it all! The full article can be found below.

The future of Canada’s marketing industry will be shaped by its youngest talent the super-worldly, plugged-in, brilliant and creative youth who are already making a name for themselves. Marketing put out the call to the industry to find the top 30 standouts under the age of 30 who have already made their mark on the industry.

From PR to advertising to media and beyond, our “30 Under 30″ showcases the smartest, bravest and most creative ones to watch in the business.

Great PR starts with a story. One that resonates with people and makes them take action or, even better, make a purchase.

That’s why Melissa Orozco, founder of Vancouver’s Yulu Communications, thinks of herself as a professional storyteller. “That’s what people in PR do,” Orozco says. We tell stories. We look for the news and extract something unique.

When Orozco first meets with a Yulu client, like the Vancouver Farmer’s Market or Fuck Cancer, she studies the company and its product, then selects which stories she thinks will make the best impression on consumers. Most recently, Yulu’s PR campaigns have landed its clients on the pages of Vogue, Fast Company and The New York Times.

Though Orozco cut her teeth working on entertainment-driven brands like VH1 and Trump, it’s non-profit stories she likes telling best. Yulu operates as a 50% cause-based agency, meaning half of the company’s clients are charities and non-profits that receive services at half the price.

Orozco, who grew up in Albuquerque New Mexico and studied PR at Hunter College in New York, often helps push Vancouver into the spotlight south of the border. By pitching American media, she’s attracted attention for Vancouver-based clients from the likes of CNN, the LA Times and Chicago Tribune.

As chair of communications for the Urban Land Institute, Orozco is currently working on promoting another initiative that’s promoting Vancouver. One of the organization’s events – a forum that asks speakers to envision Vancouver’s future called Vancouver 2050 – will be featured in the New York Daily News this fall.

The organization, which Orozco volunteers for outside her role with Yulu, is a prime example of a Vancouver organization she helps promote out of town. “A lot of what we do is about raising the profile of Vancouver and building it up to be the thriving city it is,” Orozco says.

For lots more of the 30 Under 30, pick up the the Sept. 10 issue of Marketing magazine. 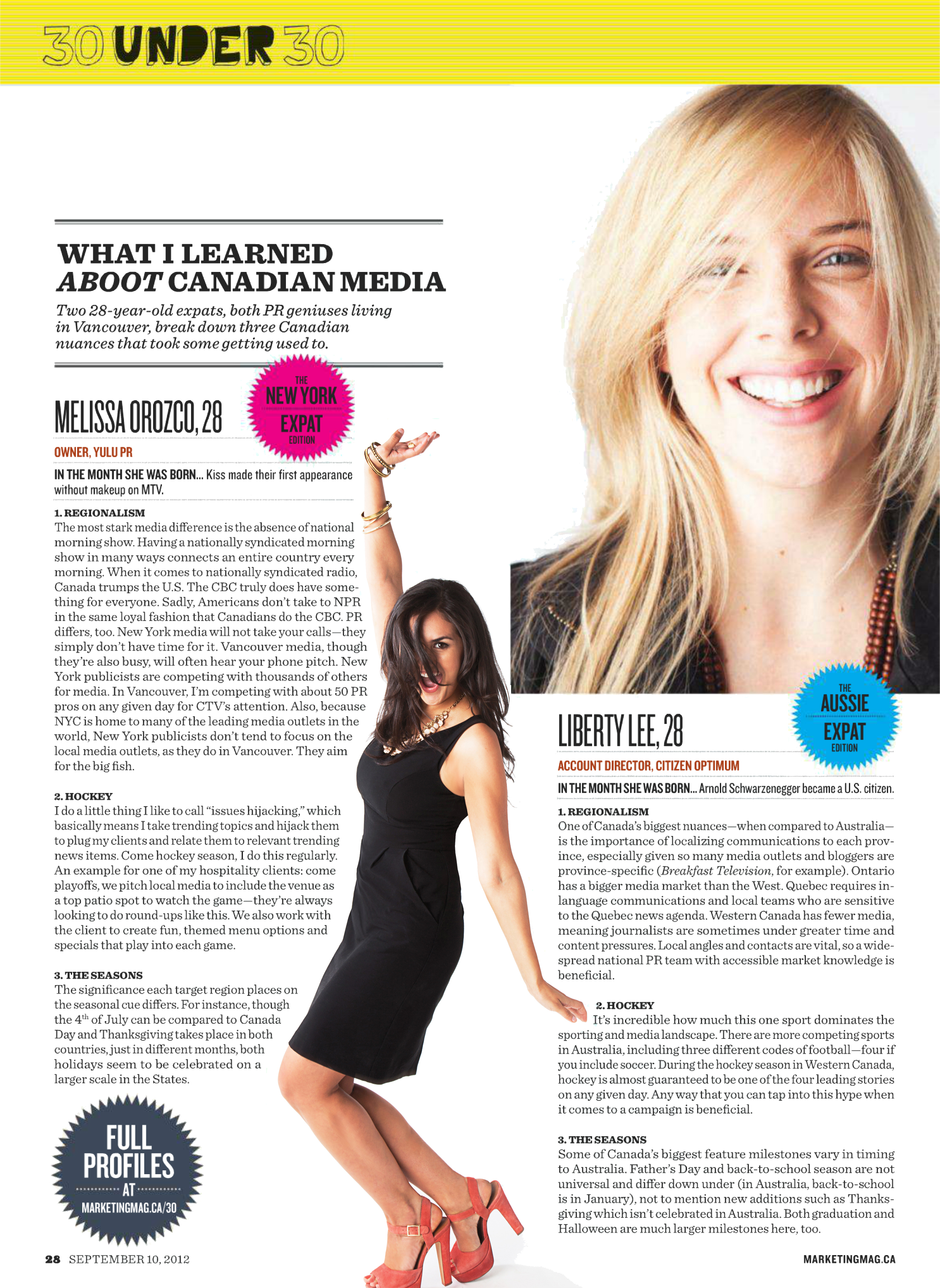