2017 was a difficult year for media. That’s the primary takeaway of the Columbia Journalism Review’s panel event: “One Dangerous Year, Threats to Journalism, from Burnout to Lawsuits.” Held in Toronto at Reuters Canada, the event was sponsored by the Committee to Protect Journalists, the Globe and Mail, and Reuters. A series of three panels, speakers outlined the topics covered in the most recent winter issue of the Columbia Journalism Review, aptly titled “The Fear Issue.”

On February 12, I attended the panel on behalf of Yulu with the intent to understand the volatile environment that journalists are facing. As media experts and purpose-driven communications professionals, we are expected to be apprised of the other side of the equation so we can better understand how to practice impact relations alongside this industry.

The event was split into three panels: 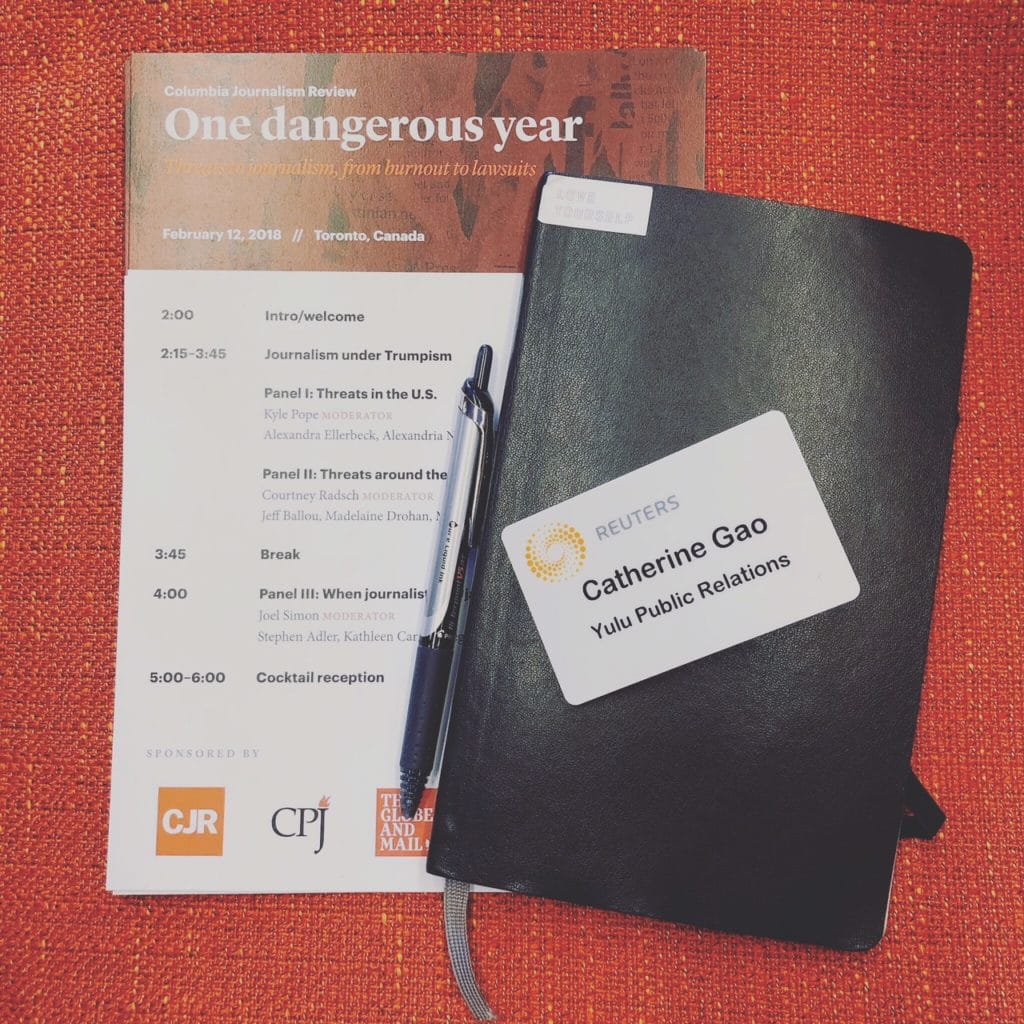 Perhaps the most interesting takeaways came out of the first panel, as Alexandra Ellerbeck, Alexandria Neeson, and Paul Thomasch explored journalism under “Trumpism.” With Trump having only been in the White House for a year, traditional journalism has faced a number of barriers – from the constant labelling of conventional news sources as ‘fake news’ to the growing threat of violence against journalists covering hostile political protests and events.

Alexandra Ellerbeck, the North America program coordinator for the Committee to Protect Journalists, introduced the crowd to the “US Press Freedom Tracker,” a database of press freedom incidents in the United States – everything from arrests of journalists and the seizure of their equipment to interrogations at the U.S. border and physical attacks. The tracker is only in its first year, so there are no references to incidents of attacks against reporters before President Trump’s time in office, but it’s main purpose is to create a central repository for data on any incidents of harm against members of the press, or anything that prevents them from doing their jobs.

The US Press Freedom Tracker documents incidents of physical violence, but it was Alexandria Neason’s discussion of emotional violence that was most interesting. Neason, a senior staff writer for the Columbia Journalism Review, wrote an in-depth article on “reporter burnout.” With the recent social issues that have come to light (race, gender, #metoo), it’s easy for reporters to find covering topics close to home “incredibly demoralizing.” Neason’s report on journalist burnout can be found on the CJR website.

Finally, what about the actors outside of the journalism space? Here at Yulu we’re no stranger to the #MeToo efforts or the engagement of public figures such as pro athletes and actresses in Hollywood. When asked about the involvement of Hollywood in the final panel (When Journalists are Jailed), Kathleen Carroll, chair of the Committee to Protect Journalists’ board of directors, said that efforts made by public figures are only a distraction if the attention is focused on something other than the cause, whether it’s freeing journalists from imprisonment in their home countries of Myanmar or China, or creating collective movement to improve sexual harassment policy in the entertainment industry. According to Carroll, this is rarely the case, and real genuine support is effective.

As a social impact PR agency, this is probably the biggest takeaway. We recognize that traditional media is constantly changing and that journalists are facing a number of risks that discredit their legitimacy amongst the public. We need public support now more than ever, for organizations such as the Committee to Protect Journalists, and for disciplines like Impact Relations, to continue moving the needle so journalists can report honestly without fear.