Katie has a reputation for designing spaces to be “smart” and functional. We knew that when working with a 300-square-foot space, a designer who specializes in maximizing spaces was just what we needed.

We had a few requests upon meeting with Katie: we wanted the office to have three workstations, as well, we wanted to save room for either a small kitchenette or a boardroom table. It seemed like an unrealistic goal initially but after Katie’s initial consultation, she assured us that with the right pieces of furniture, we could create all three workstations we needed, build a small kitchenette, and still have room for a decent-sized boardroom table…we were skeptical, but she proved us wrong!

Smart purchases: Our furniture budget was not huge but fortunately, there are three IKEA’s within 40 minutes to Granville Island. Between that and Katie’s interior design wholesale access to some of Vancouver’s top furnishing suppliers, we were able to pull pieces from both ends, ensuring that the end product did not look like it came straight from the IKEA showroom. 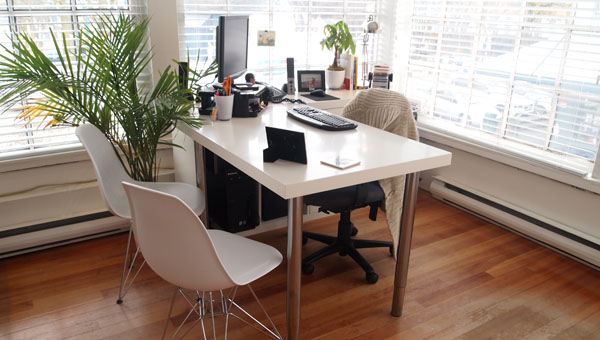 Smart Design: The placement and function of the kitchenette is an example of how we utilize built in functions. The kitchenette’s location solved one problem that we needed to solve, which was wanted to add more privacy to the washroom.

The cupboard hides our water cooler and acts as storage and the drawers house the dish drying rack so counter space is left open. 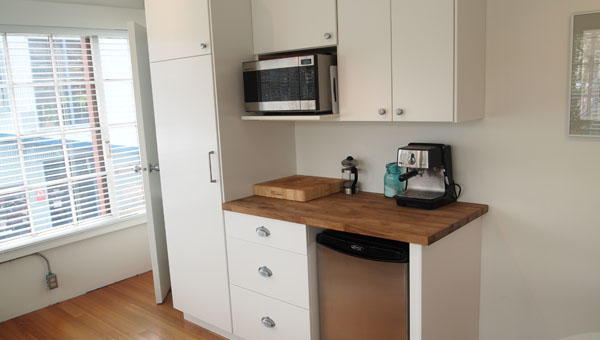 An office of our size does not need a full-sized refrigerator so we purchased a mini fridge, which tucked away nicely under the countertop. Also, because of the compact but functional size of our kitchenette, we were able to fit a rather long boardroom table along the side of it, maximizing the use of the entire south wall.

Similar to how we repurpose news stories in PR, Katie helped us to repurpose standard IKEA furniture. Most of our desks and storage units came from Ikea but because Katie helped us look at it another way we ended up with customized furniture that suits our needs. For example, we used bookcases turned on their sides as an extension to our desks, which doubled as storage. We also replaced the original desk legs, which were solid panels, with poles, as it opened up the floor a bit more. 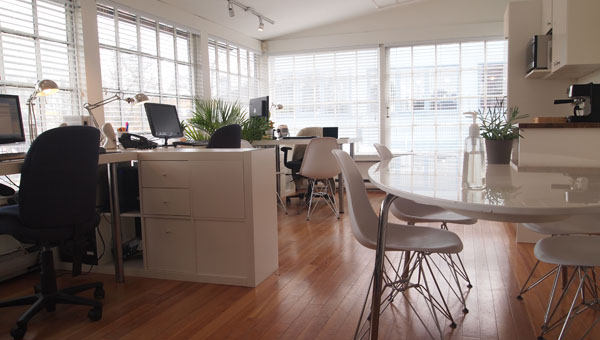 Cost saving perks of working with a designer: Some may feel that bringing a designer on is a luxury that they can’t afford but with the savings we had access to through Katie’s inside wholesale rates, we just about broke even. For instance: Katie helped us score our designer meeting table chairs that retail at $250/ea at a great steal of a price. She also helped us hunt down treasures like our meeting table, which we ended up finding on Craigslist. 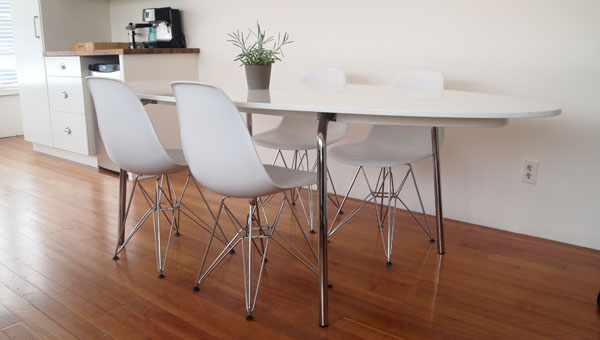 Katie had great ideas for cost-effective alternatives to wall art. Two things we did were frame our favourite media moments; we used a local framer on Granville Island and now proudly showcase our hard work.  We also purchased magazine racks from IKEA and have a media wall, showcasing magazines we pitch daily, which ties in perfectly for a PR agency. 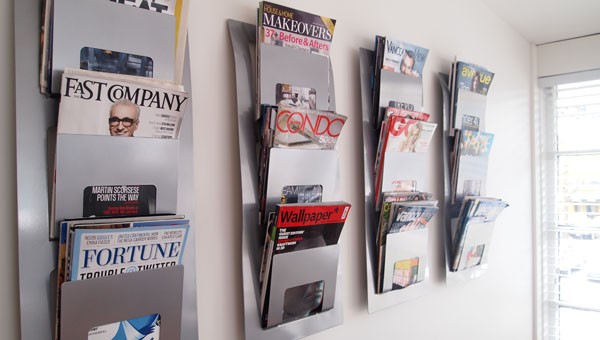 We were able to convert this conservatively-sized office space to suit our needs and have made a comfortable and efficient working environment.