(Disclaimer: The opinions expressed herein are those of our copywriter and do not reflect the opinions of YULU PR, except for the part about his looking good in white – hot damn, does he ever look good in white.)

I am a romantic at heart and, when the Netflix queue is empty and nobody wants to go drinking with me, I will float the idea to my girlfriend that we “head out” and “do something.” Those bold moves are why she keeps me around, and also how we recently came to attend our first Diner En Blanc.

Really, it was my sweet girlfriend’s idea, not mine; having bought the tickets and organized everything, but the point is we were both keen and had cleaned up real nice-like, looking forward to a classy evening.

I didn’t know much about Diner En Blanc, only that it was an annual event and that I’d seen groups of Vancouverites wearing all-white around this time of year before, and I was certainly curious what was up with that. I also like trying new things and how I look in white linen (like a stud) so I’ll happily use any excuse to rock it.

My French is rusty but I think “Diner En Blanc” loosely translates to “Dinner With Fedoras,” or possibly “Aryan Picnic.” What I learned for certain is it is indeed an annual soiree, with an all-white dress code, and where invitees converge on an outdoor meeting spot to dine and revel al fresco, all while kicking back to old-timey French jams.

The idea is to commune with your friends and strangers alike, taking in the good vibes and visual feast of an all-white P.Diddy Hamptons garden party or I guess a Klan rally, but more likely something in between. The whole thing is essentially a big fancy picnic, only you are asked to pay retail for alcohol and to wear white, and you are not necessarily in a green space but, as in our case this year, a concrete superstructure. So maybe a much worse version of a picnic in the park then — but hang on, that’s maybe unfair; maybe read on and decide for yourself.

Everything at DEB is BYO: food, chairs, tables, even your floral table centrepieces, if you want to class things up, as we did. I’m going to go ahead and write that again: you are required to bring your own tables and centrepieces to a dinner that you paid for.

That may not seem absurd, necessarily, until you find yourself on the Skytrain, dressed like the Glad Man’s idiot half-brother, hauling your fancy cold cuts and garden furniture through crowds of commuters, who’ve had long days at work and just want to get home and, jesus, who’s the sweaty creep-o in the white 3-piece suit, blocking our exit with a picnic table?

But the upside, you would figure, is at least the event is free, because everything is BYO and getting there is a chore, and you would of course be mistaken. Tickets were $75/couple, and if that seems excessive for a BYO outdoor event for hopelessly vain, creatively vacant lemmings (myself included), then I would say you need a more positive attitude, buddy, because that’s just your opinion and probably mine as well.

Actually, there was one thing that was not BYO: booze. It had to be purchased on site, which was unfortunate, because the DEB wine queue was so absurdly long that you could have effectively “fallen off the wagon” and gotten back on again several times, awaiting your chance to purchase your own $40 bottle of Stumbling Meerkat or whatever.

Speaking of long waits, the event really began before we’d even arrived at the secret venue. We first needed to assemble at one of the pre-venue meeting points – understandably a part of the logistics of trying to corral some 4000 attendees into any one location – which, in our case, was the Broadway/Cambie Skytrain parking lot.

We were in that lot for over an hour, waiting for the organizers to give us the venue information. There we were, some three hundred of us, dressed to the nines, confused and sweltering in the August heat. I know what you’re wondering and the answer is, yes, we did look like 300 losers who’d come to the collective realization they’d been stood up by their prom dates.

At least my date and I had cheese and smuggled cocktails to take the edge off and I’ll be honest, they did do the perfect job of passing the time. Taking down a Brie wheel and some homemade firewater, perched on a parking median, was definitely the classiest loitering and open container-ing we’d done in a while, and it was, truthfully, a lot of fun — no thanks to Diner En Blanc.

When we finally received our instructions, we re-boarded the Skytrain and made our way to the mystery venue, Canada Place or, more accurately, the two levels of exterior balconies of Canada Place. You are probably thinking that is a really dumb place for a big picnic and, of course, you would be right. Canada Place is a convention centre in Coal Harbour and, functionally and architecturally, it resembles a cruise ship. That means the balconies are really just long, narrow walkways.

The whole idea of having a white-themed party, I would think, is having everyone in one big mass of white, reveling together in a big open space – maybe a nice green park or meadow, where the verdant splendour perfectly complements one’s sartorial finery, or in my case one’s linen shirt and tennis shorts.

No, instead, the groups were segregated into small sections of narrow, multi-storey walkways. It made little sense. It took us a half hour to find our designated set-up spaces for our tables. Once we sat down, set up our table and were amongst our group, it was nice; all white roses, you might say. The dinner my girlfriend had prepared was lovely, and were with our friends. It was like we had oh, I don’t know, organized our own dinner.

But we just couldn’t figure it out – where had our money gone?  What had we paid for, exactly, besides the opportunity to tell others we had attended Diner En Blanc?

Sure, there were some hints of entertainment that were included in the price: there was jazz music piping through the speakers near our table. There was a stilt-walker and unicyclist duo that greeted us at the entrance.

There was also, believe it or not, a couple who had their wedding ceremony at the event. That was an odd choice. I sincerely wish the bride and groom all the happiness in the world. But I also felt bad for them, because it surely must have been an anti-climactic setting.

At one point, the wedding officiant, who was also the event’s MC, name-checked Dr. Quinn, Medicine Woman in his speech, because why the fuck not, right? The whole thing was terribly cheesy and ill-conceived; it was, to be fair, consistent with the whole evening.

We were also handed out sparklers at one point, for some temporary ambience I guess, and there was an opportunity to take selfies with this poor bastard: 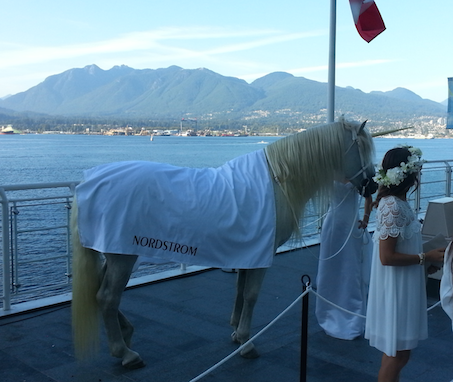 Alright, alright. So it was an ill-conceived, poorly executed event. And yet, burning, like so many of those WTF Dollar Store sparklers, lay the question: where’s the actual problem here? What am I really complaining about? Am I actually that much of an entitled, narcissistic prick to be complaining about the most First World of all First World problems; an entitled yuppie didn’t like his night out?  Boo-fucking-hoo, right?

Well, no. I mean, yes, I am a bit of a prick but, no, for starters, we did have a nice time in spite of DEB, so that wasn’t the problem. The part that was left up to DEB was a rip-off – and that is my point, friends, because my concern is no one else who attended will have the guts to admit it was a failure of an event and a dumb way to blow $75. Because nobody likes admitting they did something stupid.

But I’ll say it: I was stupid. I do stupid stuff all the time, and this was another one of those times. I had FOMO and I thought we needed to go and we really, really did not need to go.

No, the reason I’ve written this is because Diner En Blanc will no doubt be back next year, trying to convince at least 4000 of us to part with our cash; convincing us that they’re offering up a magical experience, and that is simply not what was on offer. There is nothing magical about contrived BYO ambience or that poor slave-pony pooping on non-magical woodchips ten feet away from your dinner table.

No, the only magic was in the organizers’ powers of persuasion, but hopefully I’ve convinced you that that particular white-robed emperor has no clothes. You’d be far better served giving your money away to charity, or hosting your own swanky picnic, or indulging yourself with an alarmingly brief Kit & Ace shopping spree — whatever, just please don’t enable a repeat of this sideshow.

And yet, I’ve got no hard feelings for Diner En Blanc. They are, at the end of the day, a private enterprise and they managed to convince us they were worth it. I’m a free-market kind of guy, and I might even say there’s something to be admired in how the organizers managed to persuade us to blow $40-a-head on a BYO-everything event; have us believe we participated in something meaningful. To paraphrase Ron Burgundy, upon discovering his dog had eaten a whole wheel of cheese (as we did in the parking lot); “we’re not even mad at Diner En Blanc – they’re amazing.”

So caveat emptor, or perhaps caveat pooping fake unicorn; learn from our mistake. Diner En Blanc fooled us, but here’s hoping they won’t fool you.

Dan Reitman is a copywriter living in Vancouver and creator of the Word Show. He likes trying new stuff, speaks passable French, and will polish off a Brie wheel in under an hour. Have something to say? Reach him at danreitman@gmail.com.