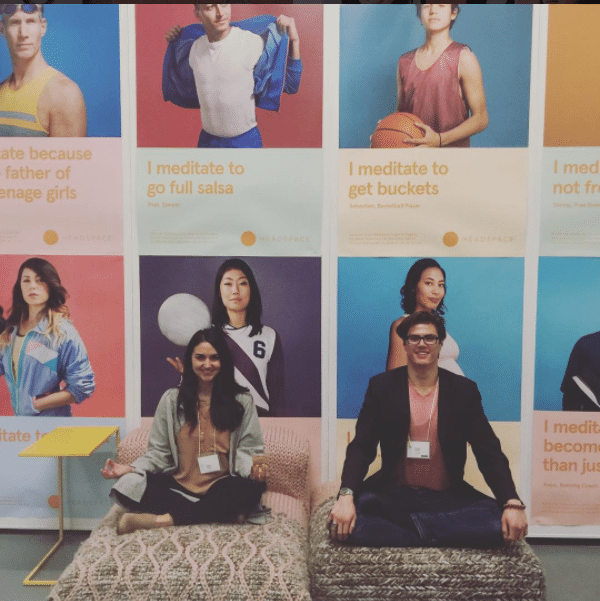 Our founder Melissa Orozco attended the Heart Series, a conference for conscious companies striving for social impact. It was a great two days

Here she is taking a little timeout for some Headspace at their headquarters in LA. It’s always great to connect with old friends. Charlie Brown has been a friend and client of Yulu PR’s since 2013 when we launched their charitable giving platform Charitweet. The company has since evolved into a mindful commerce platform that’s changing the fintech + philanthropy space.

Thanks to Headspace for hosting a wonderful afterparty for all of us Heart Series attendees!

Through the power of PR and storytelling, B Corp PR Agency Yulu Public Relations had a small hand in the fight to repeal the HB2 “bathroom bill” in North Carolina this week. The bill limits anti-discrimination protections for the LGBTQ community and forces transgender individuals to use bathrooms that do not correspond with their gender identities. The conversation that took shape after was a strong affirmation for us that doing good is good business, and not being on this wagon poses severe penalties.

On April 5, we received an email asking for our input, as a member of the B Corporation community, on the decision to relocate the annual B Corps Champion Retreat from North Carolina, in the wake of the HB2 “bathroom bill” coming into effect. We knew we were looking at a big story ahead of us and flagged this to B Lab (the nonprofit that represents the 1,600+ businesses in the community) as an opportunity to influence change among businesses by speaking openly with the press on why they came to the decision to relocate.

We’re so proud to be part of a business network that takes a firm stand for the social values of its members and the LGBTQ community, because HB2 is more than North Carolina. Yulu and B Lab collaborated on a strategy which changed rapidfire as new developments took the story to trending status. North Carolina was losing money fast, as influential players like Deutsche Bank and PayPal froze business operations and Bruce Springsteen and Bryan Adams cancelled their concerts in North Carolina. Governor McCrory announced the day after we sent out the initial story parts of the bill would be changed, but the most important parts of the bill would not be repealed.

Since Yulu took this story to the press on Monday, it’s been picked up by hundreds of writers in articles that mention B Lab’s actions, including Fortune, Mashable, and The Atlantic…we’re still trying for Real Time with Bill Maher! We’ve seen the power of a small group of businesses to shape a conversation. We’re looking forward to the coming weeks of telling stories of business and social values coming together, with B Lab as well as other clients.

Standing for Inclusion, B Corps Relocate Series of October Events

WAYNE, PENNSYLVANIA ­(April 11, 2016) – Today, in response to HB2, North Carolina’s new law limiting anti-discrimination protections, the global community of nearly 1,700 Certified B Corporations announced it will relocate a cluster of October events out of North Carolina. Those events include the annual global gathering of B Corp CEOs and executives; a series of public talks and street festival called B Inspired; a conference for the economic development arms of city governments, corporate supply chain managers, and impact investors called Measure What Matters; and a conference for university educators teaching business as a force for good.

“B Corps seek to build a more inclusive economy, and that is not possible with laws like HB2 on the books,” said Jay Coen Gilbert, co-founder of B Lab, the nonprofit behind the B Corp movement. “Through the upcoming legislative session, we will work closely with the North Carolina B Corp community and the LGBT community most affected by this law to make North Carolina more business friendly and enable us to return as soon as possible.”

HB2 requires people to use public bathrooms associated with the sex assigned on their birth certificate instead of that with which they identify, which most adversely affects transgender people. HB2 appears to remove the civil right of all people to file anti-discrimination lawsuits with the State based on race, religion, color, national origin, age, sex, or handicap. HB2 also eliminates the ability for cities in North Carolina to support a living wage. The ACLU (American Civil Liberties Union) has filed a lawsuit in federal court challenging the constitutionality of HB2 under the Equal Protection clause of the U.S. Constitution.

Kevin Trapani, CEO of The Redwoods Group, a Morrisville, North Carolina-based commercial property casualty insurer and Certified B Corp said, “As it actually says in North Carolina law, we believe that discrimination ‘foments domestic strife and unrest, deprives the State of the fullest utilization of its capacities for advancement and development, and substantially and adversely affects the interests of employees, employers, and the public in general.’ We are ready to work with proponents of HB2 to help forge ‘One North Carolina’ that lives up to its own creed so that we can welcome the global B Corp community to our great state as soon as possible.”

John Replogle, CEO of Seventh Generation, who leads the national brand and Seventh Generation Ventures from HQ Raleigh, said, “As a founding B Corp, we stand united with the 1,700 CEOs who are using business as a force for good and will muster all of our resources to overturn this abhorrent law. North Carolina deserves better and the business community must stand united that HB2 is bad for our state and bad for business.”

B Lab is a nonprofit organization that serves a global movement of people using business as a force for good. Its vision is that one day all companies compete to be best for the world and society enjoys a more shared and durable prosperity. B Lab drives this systemic change by: 1) building a global community of Certified B Corporations; 2) promoting Mission Alignment using innovative corporate structures like the benefit corporation to align the interests of business with those of society; 4) helping tens of thousands of businesses, investors, and institutions Measure What Matters, by using the B Impact Assessment and B Analytics to manage their impact — and the impact of the businesses with whom they work — with as much rigor as their profits; and 4) inspiring millions to join the movement through compelling storytelling by its multi-platform branded media company B the Change Media. For more information, visit www.bcorporation.net.

Certified B Corporations meet the highest standards of verified social and environmental performance, public transparency, and legal accountability. They achieve a minimum verified score of 80 out of 200 available points on the B Impact Assessment, which measures the positive impact of a company on its workers, customers, community, and the environment, and are legally required to consider the impact of their decisions on all stakeholders, not just shareholders. There are 1,674 Certified B Corporations in 130 industries and 48 countries, including 32 in North Carolina.